Last weekend, I went with my friends to the Western Mountains, just outside of Kunming. They are directly adjacent to the Dian Lake, the larget lake in Yunnan Province. Sadly, the water is heavily polluted, making it unfit for swimming, fishing or other industrial use. In the mountains itself are many spots worth a visit. This includes many buddhist temples, pavillions, historic sites and gardens.

The weather was almost perfect, 25°C in November and a clear blue sky. For me, it was almost too warm. But this was also the last day for Peter in Kunming. I met him here and we made good friends during his 3 weeks stay. The next day he flew back to California after half a year of traveling. It is nice to hike with friends, but the looming goodbye was always on my mind. Also joining us was Kai, which I also met at Keats.

Western hills area is really convenient to reach, as there is a subway station right between the mountains and the lake. From the subway station, we investigated the way down to the lake. It is an alley full of food stalls and other tourist shops. At that day, it was very crowded. We looked around and then headed to walk up the mountain. 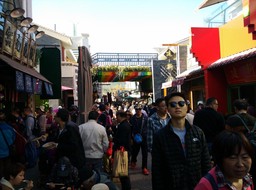 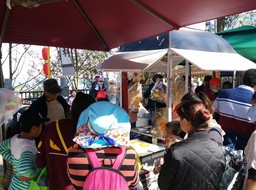 There are three ways to go up: walking, taking a bus or taking the cable car. We decided to walk up and then take the cable car down for the views. When looking on the map, we started from the bottom left. Every 5 minutes the busses for the people who are less inclined to walk pass by and homk, making the pedestriants jump out of the way. For me, that was pretty scary every time, somehow turning the else pleasant walk annoying whenever that happened.

The first stop was the Huating temple. We reached it after around 2km of walking up the hill. It has a nice interior yard with a pond. On the right side after entry is the temple shrine itself. 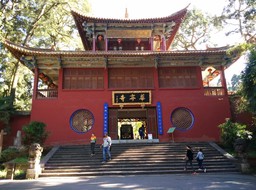 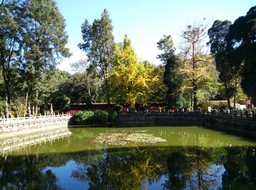 After we explored the temple and had a short rest, the walking went on. Soon we came to a crossroads. The choice was either going up a steep staircase carved in the stone or continuing the asphalted road. We chose the stairs, as it was said to be of a shorter distance. This stairway is labeled “Taihua Ancient Passway” on the map. While it was quite demanding to walk up the stairs, we were rewarded with a terrific view on Kunming. 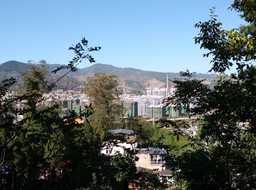 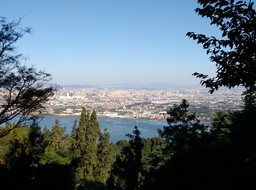 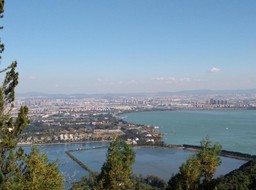 The second temple was the Taihua temple. It is located in a grove halfway up the mountain. It is very peaceful and quiet. The view from this place is astonishing. I can imagine to live there for a while. The only problem is getting up there. It is offered to purchase red silk prayer ribbons to pass on wishes for your loved ones.

I also took photos of the Buddha statues, but my teachers told me afterwards that in some temples it is frowned upon. While it is in Kunming not that strict, I still do not want to be even more disrespectful, therefore I keep these pictures for myself. 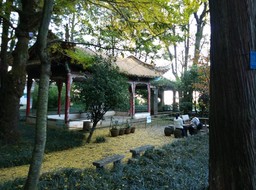 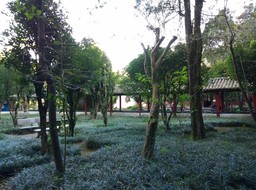 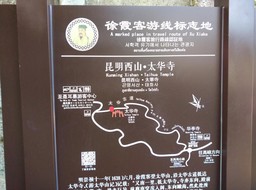 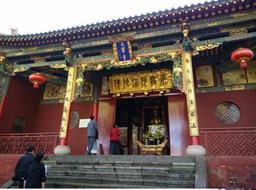 The last part of the trip was going up to Dragon Gate. When we arrived there, it was already quite late. Also, in order to access the Dragon Gate scenic area, one has to buy a not too cheap ticket. That is why we decided just to take the cable car down and over the Dian lake. Near the exit station is also the Yunnan Nationalities Village.

The cable car ride was very nice and totally worth it, but we did not find an easy way to go back to the school afterwards. There is no subway in the vicinity, taxis did not want to take us, Didi was too expensive. Finally, Peter led the way and we took the bus. It was rush hour and the ceiling of the busses was too low, so the final leg was not too enjoyable. Back at the school, we had the last dinner together as the three of us. It was a really nice, trip, I want to go back there again and explore more. There are still so many places I have not been to in the mountains!

I am a computer science PhD student and Chinese learner.